Or maybe, for a long time, you’ve been looking in the women’s section for a good pair of running shoes that fits your feet well but couldn’t find any and you’ve decided to Google the question.

Whatever is the reason that could have led you to look up the question, rest assured. Even though the answer to that question is not a mere “yes” or “no”, as there are a lot of implications that go into answering it, by the end of the article, you’ll have a satisfying answer and you’ll find out if it’s safe for you or not to wear men’s running shoes.

Why Are Shoes Separated By Gender?

Before we dive into can women wear men’s running shoes or not, let’s begin by exploring why shoes are separated by gender in the first place. Below are three main reasons why shoe companies had to separate shoes by gender. 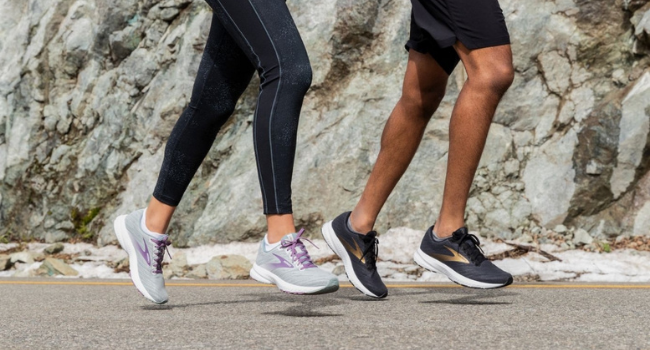 In the past, shoe manufacturers didn’t bother to come up with shoes designed specifically for women. Most of them used to simply scale down men’s shoes and call them women’s, without taking the time to study the differences between men’s and women’s feet.

Nowadays, however, with many scientific studies coming out, the old strategy of “shrink it and pink it” is becoming obsolete, as these studies suggest that there are a lot of physiological differences between men’s and women’s feet and overall lower body, like the width of the heel area and the forefoot, as well as the Q-angle.

These three physiological differences influence to a great extent how a pair of shoes is designed and whether it’s made mainly for men or women. We will talk about these in detail in the next section, where we’ll take a look at the key differences between men’s and women’s running shoes. For now, let’s move on to the next thing that explains why men’s and women’s shoes are created differently.

Shoe manufacturers couldn’t cater to men’s and women’s styles and color preferences with one product. So, they had to create different products for each gender. The colors and styles women are drawn to are different from those men find appealing. Women tend to buy shoes in more vibrant colors and shades, like the famous pink and they go more for shoes with a lot of patterns. As for men, they usually prefer to buy shoes in darker colors, like black, brown, and gray; they tend to opt for minimalist and simple designs.

The last reason why shoe manufacturers had to separate shoes by gender is obviously that they saw a great opportunity for great financial gain. When these companies come up with a product designed specifically for women, they know they can easily up the price and charge a premium more for it, as it is custom made and geared towards one particular audience, instead of a general product designed for everyone.

What Are The Differences Between Men’s And Women’s Running Shoes? 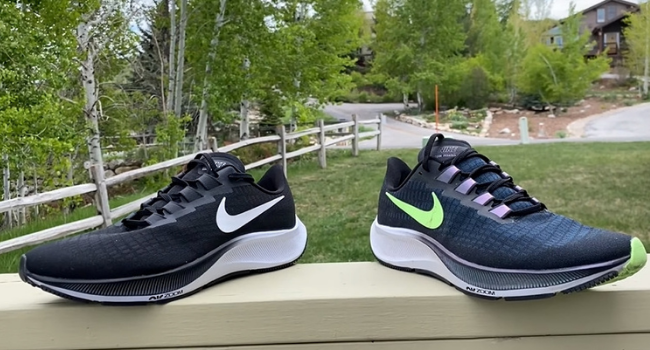 The Overall Shape Of The Shoe

The first obvious and main difference between men’s vs. women’s running shoes is the overall shape of the shoe. As mentioned before, men and women have different foot anatomy. The heels and the forefeet regions, in particular, differ significantly from one gender to the other. Women, for example, tend to have narrow heels and slightly wider forefeet. Men’s feet, on the other hand, tend to have the same heels and forefeet width.

Keep in mind that these measurements aren’t 100% accurate and they only account for the size of the shoe, not the width.

A midsole is an important part of a running shoe, as it provides cushioning and stability and also helps absorb impact. Men’s and women’s running shoes come with different midsoles. Men’s running shoes tend to have a harder and heavier midsole. On the other hand, the midsole in women’s shoes is lighter and relatively softer. The midsole difference between men and women is due to the difference in muscle mass between the two. For example, if we take a man and a woman of the same height and shoe size, the man would weigh 15 percent more than the woman.

One of the major differences between men’s and women’s lower bodies is the way their feet roll inward when running or walking, also known as pronation. How feet pronate is determined by how wide the Q-angle is. The Q-angle, for those of you who don’t know it, is the angle that your quadriceps muscles form relative to the kneecap. Since women have wider hips than men, they tend to have a wider Q-angle, and as a result, they pronate a lot more than men do.

The short answer is yes. Women can indeed wear men’s running shoes. However, they should consider the differences between their feet and the men’s feet we’ve mentioned previously.

If you feel like you have somewhat wider heels than average and you’re looking for comfortable shoes for running on concrete or in the woods but couldn’t find a good one in your gender’s section, opting for a good pair of men’s running shoes will save you a lot of time and money.

However, if you have narrow heels or not so wide forefeet, then a look at men’s running shoes pros and cons below could help you decide whether it’s worth investing in one or not.

Let’s look at a few characteristics in men’s running shoes that could be disadvantageous for women:

With the difference in the heel region between men and women, a woman with an average heel width could hurt her feet wearing a pair of men’s running shoes, since there will be a lot of space between the ankle and the shoe counter. With constant friction, this could lead to blisters and chafing. Even worse, if you are running on an uneven surface, like in the woods, for example, you could even have your foot overpronate, resulting in a serious ankle injury.

They Weigh A Lot More

Because of the difference in shoe soles between men and women, running shoes designed especially for men tend to be heavier than those made mainly for women. For a woman who’s not a little overweight, this may be a struggle, as there will always be extra weight clinging to her feet when running.

Not A Lot Of Variations To Choose From

Another drawback to men’s running shoes is that they don’t come in various styles and colors. It doesn’t matter if a shoe fits you or not, if its style and color don’t appeal to your eye, it just isn’t worth it, especially if running is something you do daily. Who wants to be stuck to a pair of shoes they don’t like just because they’ve got a good fit!

While men’s running shoes sure have their own drawbacks, there are also some advantages to them.

They Are Less Expensive

When you convert women’s running shoe sizes to men’s, most women with smaller feet will find that their feet fit well into men’s smaller sizes.

Comparing those to women’s larger and wider sizes, they tend to be a lot cheaper. Some women could even find that the boys’ sizes are more appropriate to them, which decreases the price even more. So, if you are looking to save a few bucks on your next running shoe purchase, a pair of men’s running shoes is something you need to consider.

The sole that comes with men’s running shoes is both a pro and a con. Yes, it adds a little weight to the running shoe, but it also makes it a lot more durable, compared to the lighter soles that come with women’s shoes.

In short, since there is no actual difference between men’s and women’s running shoes when it comes to functionality, there are only three criteria left that a woman should look for when deciding whether a pair of running shoes is for her or not. The first is the color and the overall design of the shoe. The second is the shoe’s fit. The third is obviously what she’s planning to use it for.

If the pair of shoes ticks all three boxes, then it’s a good buy. Period.

Are There Any Unisex Running Shoes?

There are unfortunately not as many adults’ unisex running shoes out there, because most shoe companies when designing a running shoe, take into consideration the difference between the two genders’ feet we’ve covered before. There are only four that I could come across that are designed for both men and women. They are as follows:

So to sum up, the next time you as a woman notice a pair of running shoes you really like, the question can women wear men’s running shoes shouldn’t be a concern for you. Instead, go ahead and put it on. If it fits you well and your feet feel comfortable in it, there really shouldn’t be anything stopping you from buying it.

Hi, I’m Nichelle Brown, the owner, and editor of this site, Feetfellow. Professionally I’m a fitness expert and businessman. Besides my profession, I love to research and write on different aspects that I’m dealing with in my everyday life. I have a footwear business where I sell various types of shoes. From my curiosity, I started research on the products I was trading in my shop. After conducting several research and surveys, I found that most people don’t know how to benefit from specialized shoes. So I started doing more research and writing on it, and “Feetfellow” is the output of my extensive research in this category.